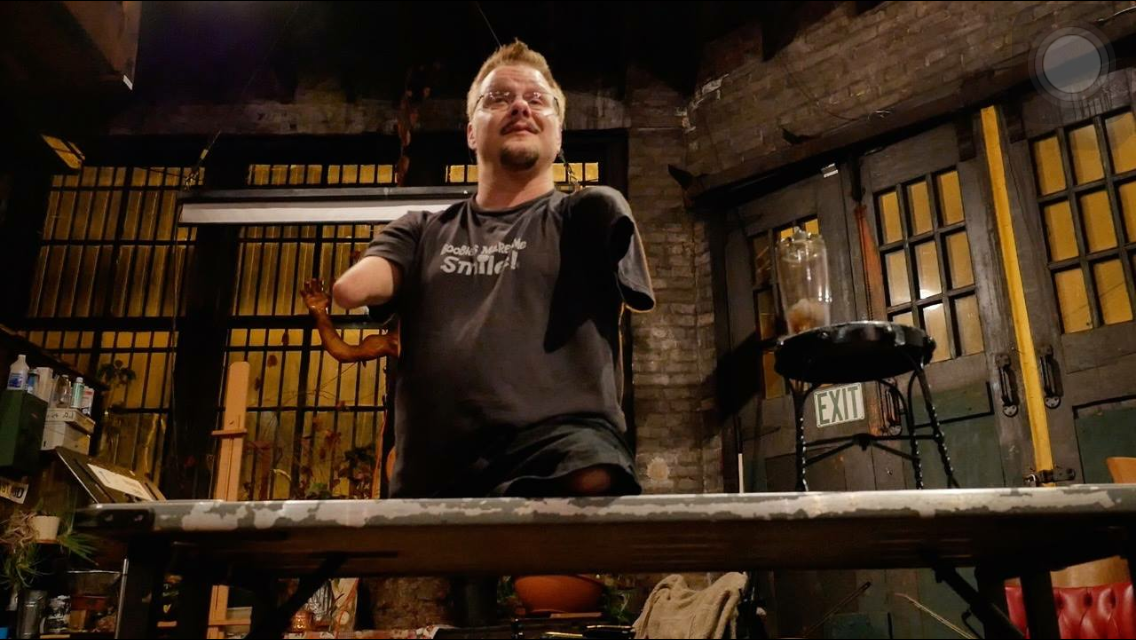 And he proved it by throwing a football into the audience. After which, he asked if anyone noticed anything about the throw. "It was a perfect spiral. And if a guy with only a stump can throw a perfect spiral you have to realize your limitations are all in your head," he explained. "What it comes down to is how many times you want to practice in order to be able to throw a perfect spiral." During football Eastburn moved down the field by "hopping around like a bunny rabbit." And if some 300-pound linebacker got in his way, he'd just run between his legs. He also played baseball, and in junior high became a member of the wrestling team and then a member of the varsity team in high school. In the 1988 AAU wrestling competition, Eastburn placed fourth in the nation. During his senior year he was a team captain. To prove his agility, Eastburn pulled a student from the audience and took him to the mat. Throughout the hour-long convocation, Eastburn encouraged the students to ask questions, allowing him to relate these stories that are his life. One student asked if he could swim. "I can jump in an Olympic-size swimming pool, swim all the way down and back and get out. So if that's an accomplished swimmer, then I am," he replied. Then it was time to demonstrate the baseball theory. Eastburn is a green belt in Tae Kwon Do, a form of karate where students learn to break boards. It was exactly this which Eastburn demonstrated. Then he explained how. "If you're ever in a situation where it's either you or them, my personal opinion is them. And in doing that, it's much safer for them and for you to put them down in one hit. If you can break a board, then you're hitting at the right velocity to do just that," he said. Unlike this day, the very first time Eastburn tried to break a board he only made a dent. Second try -- dent. Third try -- another dent. Each time he was getting madder. "That's when the instructor said, 'Hold on Brett. The problem is you're afraid of the board,'" he related to the students. "I said, 'Pardon me sir, I mean you no disrespect, but do you see all those dents?' "What I didn't know is our brains have this safety mechanism built in. Our minds tell our bodies, 'Hey stupid, this is going to hurt.' That's when the body slows down and the energy in the board is thrown right back at you." The instructor told Eastburn to imagine the board three inches lower than it was so he would hit with follow-through. Then, in his mind, he was to see his arm going through the board. "Using this theory I believe anyone in here can do this," he said. "It's the old how many times do you want to practice something to do it right? If I would have stopped on the third try breaking a board or balancing a basketball on my arm they would never have gotten done." Another question from the audience focused on limitations. He admitted it took until seventh grade for him to realize people thought he should have limitations. After all he had an electric wheelchair, allowing him to keep up with his friends ... he was getting good grades. Then, his wheelchair broke down. He could no longer keep up. "I had all these friends and they were pushing each other out of the way for the privilege of pushing me. Well, that lasted about a week," he told the students. "That's when my teacher assigned one student each day to push me and another to carry my books. There was one problem with that. I became an assignment. Seventh graders don't like assignments so I lost all my friends." Then, the students who were supposed to carry his books would leave them in their lockers. Eastburn wasn't getting credit for work he did and his grades suffered. So, why do it. One day during science class the students were mixing chemicals and the teacher told them to mix two certain chemicals, but never mix thisdo?" soon followed from the audience. "I know for certain there is one thing I cannot do. I cannot get pregnant," he admitted. But everything else, it seems, is fair game right down to the exact job Eastburn wanted.

That job was an undercover store detective -- the person who shops for shoplifters. But the manager took one look at Eastburn and asked him if he'd like to be a greeter. "That's the person that sits by the front door and says, 'Welcome to our store. Come in and buy things,'" he said. "I would greet people and tell them for every ten items they bought I'd get a bonus. I had people come up to me and tell me they bought extra things just because of that. I was selling from the front of the store!" Eastburn did that for six months. But he never lost sight of what he really wanted and continually let the store manager know his wishes. "Finally he couldn't take it anymore and when I asked him why I couldn't be a store detective he said, 'Because each detective is required in class to do a forearm block. If you can't do the block you can't get the job. You don't have a forearm so you can't do the block.'" Eastburn suggested they change the rules.

But for one person, the manager wouldn't hear of it. That's when Eastburn brought up the Disability Act. Not wanting to get into that, the store manager tried to dissuade Eastburn another way. "He asked me if I stopped a person how I would handcuff them. I asked if I could try it on him ... about a 300-pound man," he recalled. "First, I stepped on his foot with my stump, then pushed on his pressure point in his knee. He was on the ground and my days of wrestling kicked in. Before he knew it I was on him and had him cuffed. "I jumped back up in my chair and watched him waller around on the floor a while, mostly just for fun." Eastburn got his job, making an average of one stop per month. He never got to handcuff anyone, but knew he could if he had to. "I was told officially in writing I could not have that job. Unofficially I was told probably a hundred times I couldn't have the job. But I got it because I wantsame for my sister, a teacher in Georgia who's married to a doctor," he explained. "I think it's much easier to go the distance with good parental support. They taught me if you make a commitment, stick to it. If you can't keep the commitment, don't make it." That parental support is part of what allowed a man with no arms to major in art in high school. With that admission, Eastburn uncapped a black marker, stuck it between his very short left stump and his chin and bent over to draw. After several minutes, he held up a picture of Garfield. You could have heard a pin drop in the room. And that's when Eastburn may have made his greatest point of the morning. He asked, "How many of you could draw this?" Seven or eight students raised their hands. That's when Eastburn raised his voice. "You're missing the whole point of this program!" he said. "I know most of you can't draw a whole Garfield. I can't draw a whole Garfield. But I can draw a circle. I can draw a curved line. And when you put it all together, you have something." It was clear this man born with no arms or legs believes he can do anything he sets his mind to. Everyone in the room seemed to agree. But showing these students what he could do was not his purpose. His goal was that those listening to him would realize the same is true for each of them.