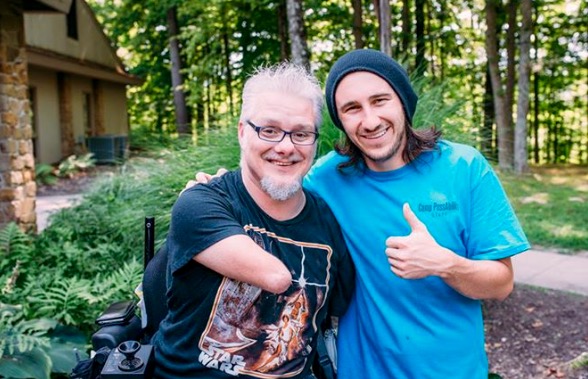 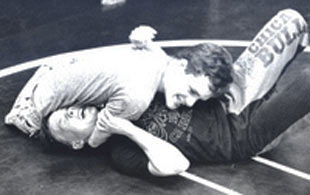 Brett was born in 1971 with a congenital birth defect known as Quad-membral Limbs Deficiency. He has no arms and no legs.

While in school Brett played baseball, football, and basketball. He also became an accomplished swimmer. In junior high he became a member of the wrestling team. In high school he wrestled on the varsity team. In the 1988 wrestling competition under the AAU Brett placed 4th in the nation.

During Brett's senior year he was made one of the team captains. After graduating he became a green belt in the martial arts. Brett is also an accomplished artist with national recognition. During Brett's senior year he began speaking professionally on subjects such as Self-improvement. Brett has travelled throughout the world giving his speeches.

Brett and his service dog Murray are the frequent subjects of news articles and TV interviews that deal with great success stories.

Brett is currently working full-time as a motivational and inspirational speaker. He is also a certified substitute teacher in his home town area.

Brett has NO ARMS and NO LEGS. But must importantly, NO HANDICAPS.

In 1990, I started this long and wonderful journey of sharing my story. It has taken me around the world. I have always known, even as a young child, that I had a story to tell.

I found that when I would accomplish even the most basic of tasks people would be amazed. People would come to me and say, "Because of seeing what you can do with your situation, I realize that my problems are not nearly as bad as I made them out to be."

I recall one story of a man whose mother had fallen and broken her hip, and after she had completely healed she would not get out of bed. His mother said her life was over. So he told his mother my story. That day she got out of bed and has been walking around ever since.

Hearing his heartfelt story confirmed in me that my calling was to share my situation with as many people as possible. I was not sure which vehicle I would use to get my story out, such as a movie or a book. Someone spoke at my high school. Then I realized I could be a speaker! By my senior year, I was doing professional presentations.

Now, many years later, I have heard of hundreds of cases of how my program has dramatically changed people's lives. Many who were suicidal before seeing me have stated they will never consider that option again. I have to credit those miracles to God. I am just trying to be productive in society and to enjoy my life. I was also lucky enough early on to realize something very important: enjoy the journey. Do not just look at the failures or accomplishments. Going forth on a path to help others is a reward in itself.

Chasing another dream, a few years ago I tried my hand at stand-up comedy. I had no idea my comedy act would be inspirational to others. Besides being a motivational speaker, I am an on-the-road comic. I find both fields to be challenging and rewarding.

So, if you know of any groups with audiences from 10 to 110 years old that you feel could benefit from our presentation or comedy, please fill out the "To schedule Brett" form page, or give us a call on our toll-free number.

Thank you so much for visiting our website and supporting our quest.